“Things can get out of a black hole both on the outside and possibly to another universe. So if you feel you are in a black hole, don’t give up – there’s a way out.” – Stephen Hawkings

I’ve just been reading an article for one of Professor Hawking’s latest conferences and this really jumped out and me.

I’ve been up and down these last few weeks; a lot has happened so I’m allowing myself to be a little moody. Quotes like the help pick me up though. Whilst it feels like MS is taking control of me that bit more I know I can pull through, blimey if we can escape a black hole then surely we can push away MS and continue living.

It’s not just the quote to enlighten me and up lift me up  but Stephen Hawkings. Back in 1963, Hawkins was given just 2 years to life after being told he had Motor Neurone Disease (or ALS, Lou Gehrig’s Disease)…. He’s recently turned 74!!

If you haven’t already seen it, it is well worth watching ‘The Theory of Everything’. It documents a large part of Hawkings’ life; focusing on his personal and family life. I had no idea how much he’d achieved and the struggles he’d been through. I’m sure he could of given up at the point of diagnosis, but he decided to push on and I’m sure has achieved so many of his life goals, and bend.

What was really poignant and something that Katherine and I could both relate to was watching how Jane and Stephen’s relationship developed despite his diagnosis, and how she supported him through his illness and his career, and how she grew into and transitioned between wife, mother and carer. Its nice to see a positive portrayal of a loving relationship involving someone with a [debilitating] chronic illness.

Katherine asked me earlier if I look to anyone for inspiration, at the time I wasn’t really sure, but Stephen Hawkings is now most certainly one; he’s shown me that no matter what we shouldn’t give up; we can all still achieve in life, especially with great support around us. Keeping a positive mind, surrounding ourselves with the right people and using the support systems around us, we can still be who and what we want.

Who inspires you? Or are there books, memoirs or films that help to keep you positive, or that you can relate to? Let us know in the comments – we’re always interested in what helps other people, and we’re always on the lookout for a new film to watch! 🙂 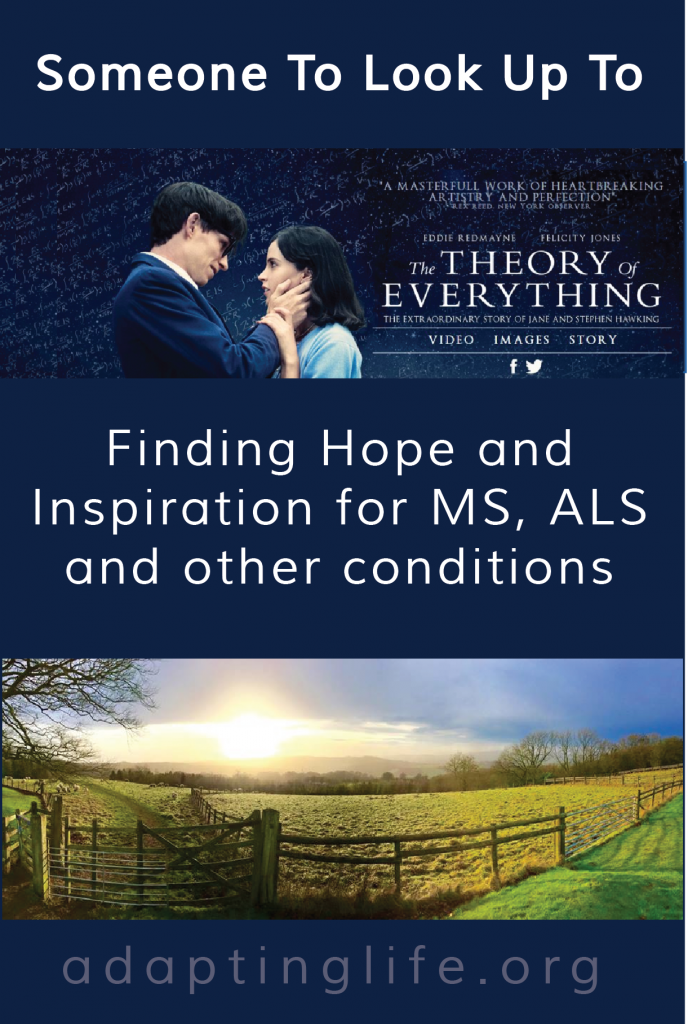 Nick is a dedicated step-parent of 2, and loving partner to Katherine. An animal lover, life long football fanatic, self confessed petrol head/car nerd and wannabe adventurer, Nick also enjoys playing with lego (not just with the children), coffee, running, reading and quiet family time. Having worked for 10 years as an expert Audi mechanic and then as an estate agent for 3... a change of pace means Nick now works with Katherine in their animal care business, whilst also developing Adapting Life into a thriving support network and social enterprise. Nick's aim is to help support and inspire those affected by chronic illness to live a fulfilled life, through sharing his story, personal coaching, alternative therapies, and lots more.